School's In is the second episode of Aidraxa season one. It takes place immediately after A New World.

The episode begins with Richard and Janet bewildered by Aidraxa's strange name. Aidraxa goes outside, but on the way is attacked by Richard and Janet's children, Leo and Lucy. He easily catches a tomato that Lucy throws at him, which upsets her into running away. Richard then comes out after hearing the commotion, and Aidraxa goes with him to check on his truck. The two return inside for breakfast, before Aidraxa attempts to get more of his memory back by trying to sleep. He's interrupted by Leo watching a cartoon. After an argument between the two, Leo storms off, and Aidraxa catches an advert for Avion high, which jogs his memory. Recognising the word Avion from somewhere, Aidraxa believes that he attends the school. He talks to Richard about this, who tells him that there's a bus that goes into the city, where the school is.

The following day, Aidraxa, Leo and Lucy take the bus into Rosehill, before going separate ways to their respected schools. On the way, Aidraxa is aggressively shoved by a criminal running away from a police officer. Aidraxa (believing this individual to be extremely rude) gives chase and shoves him back, getting him arrested in the process.

The scene cuts to Avion high, where two teenage girls are standing around by their lockers talking about different types of people at school. One of the girls (Michaela) bets that she can predict the actions of anyone who walks through the entrance. She mostly succeeds until Aidraxa walks in and begins to ask the girls for directions, but Michaela accidentally shouts at him. He walks away looking for "someone wiser" and the episode ends with michaela correcting herself saying that the following school year may not be as boring as she expected.

In the epilogue, the criminal from earlier is being interrogated by a police inspector, before being released by other members of his gang, as they conspire to track down Aidraxa for helping the police catch their ally.

Leo dons his battle armour (consisting of a baseball helmet, a towel and a water pistol) to fight Aidraxa. 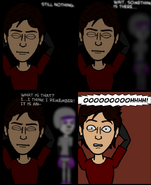 Aidraxa goes to Rosehill for the first time in this episode.

A member of the Flamewar gang runs away from the scene of his latest act of arson.....

.....And Aidraxa kicks his ass for shoving him.

Michaela's next prediction quickly turns out to be a painful one for Jon.

Aidraxa meets Michaela and Christina.
Add a photo to this gallery

This is the first episode in the series to have bitstrips users as extras. These include James Matthews as the bus driver, Isabella Baxter, Kevin Ryan and Meimoe101 as students.

Retrieved from "https://raconianheroes.fandom.com/wiki/School%27s_In?oldid=5705"
Community content is available under CC-BY-SA unless otherwise noted.