Were you looking for Poom the species?

Poomy is a main protagonist in Agnetia. He travels with Agnetia and Bluestreak on their quest to track down Daemus and Dakota Shane.

Like most Pooms, Poomy is about two ft tall, has brown fur, large eyes and a small orange nose. He usually wears plain white clothing, the only exception so far being in Agnetia the Alien: A Frightmare Before Christmas when he is wearing a white coat with black gloves, boots and hat.

Despite not talking and not having many facial expressions, Poomy has as much personality and life as his teammates. He is about the age of a human toddler and often acts like one. He is excitable and easily scared, but in desperate times he refuses to give up, especially when his friends need help. He often inadvertently puts himself and others at risk, like when he jumped off a cliff into a cave in Agnetia the Alien, Episode 5: Homecoming. This could either be due to recklessness or simply overlooking the dangers of his actions.

Poomy lived on a mining planet (now known as Poomia, for its large population of Poomahs) along with his tribe of Poomahs. They were enslaved by Dakota Shane and put to work in mines, mining Nega energy for a mind control weapon. They were to be rescued by Bluestreak, until Dakota brainwashed her into joining her cause. Poomy actually saw this while hidden behind a rock and tried to warn her, but she couldn't understand him. And by the time Bluestreak was able to understand Poomian language, she was too deeply brainwashed to believe him.

Then, years later, Agnetia crash landed on the mining planet due to unknown circumstances. She soon met Poomy and instantly loved him due to his cuteness. Dakota allowed Agnetia to keep Poomy, hoping that she would leave and not interfere with her plans. But when Poomy fixes Agnetia's ship and she detects the Nega Energy, she, Bluestreak and Poomy went to investigate, and caught Dakota in the act. They tried to stop her but Dakota proved too powerful with her energy whip. Angered that his friends were hurt and surrounded by Nega Energy, Poomy was able to transform into a giant monster to battle Dakota, then defeat her with the help of his fellow Poomahs.

It was revealed next episode that Poomy didn't do too good a job of repairing the ship, as it was in very bad condition (Bluestreak noted that she found a half eaten carrot wedged in the satnav). However, he is a good fighter as he has managed to defeat a Frightmare-controlled Poomah, Set (with the help of new friend Has), and a large army of Moops.

Things changed in Star Crossing Lovers when Poomy met Poometta, a female Poomah who was an agent of the Racos junior command. He had a crush on her instantly and began to flirt with her, much to Jafraries' annoyance. When Poomy, Agnetia and Bluestreak were imprisoned on Jafraries' battle station, Poometta brought the trio some carrots. Poomy confessed his feelings for her but Jafraries caught them. Poometta stood up to him but was punched into the prison by Jafraries, who then slammed the door. Poomy caught her and growled at Jafraries.

He went on to meet his "brother" Cyril in Homecoming, and tried to defend him from an army of Shadors. They attacked Agnetia and took her out, then surrounded Cyril. Poomy, enraged, unleashed his claws and rushed at the shadors, but they vanished with Cyril. Poomy was devastated, but then he noticed that Agnetia was still laying there. He realised he had been teleported away and tracked him to a cave, where he and Bluestreak found Cyril (and his clones) in Daemus' lair. Daemus found and attacked Bluestreak, brutally snapping her neck. Knowing she only had 10 minutes to live, Poomy froze in fear, rage and panic. Then he heard the voice he wanted to hear most: Agnetia's.

Managing to escape Daemus (and Dakota), Poomy, Cyril and Agnetia found that Bluestreak was still alive, but she needed Alpha Energy to heal. Poomy used his Iron Poom MK III armour, which had energy transmitting capabilities so he could instantly power Bluestreak's healing cycle as soon as he finds Alpha Energy. They're ambushed by Dakota, who was also hunting Alpha Energy for Daemus. She quickly defeated Agnetia by short circuiting her energy suit. This made Poomy very, very mad. He turned on a translator in his armour and threatened Dakota. When she laughed him off as a minor threat at best, he used every weapon in his suit's surprisingly large arsenal prove her wrong, before absorbing some Alpha Energy and using some to heal Bluestreak and Agnetia, and the rest as an energy blast, finishing Dakota. Unfortunately, it also disabled his armour, so Agnetia had to teleport him back to the ship for safety. Later, the ship is caused to explode and Poomy, despite still wearing his armour, is wounded. His armour is mostly destroyed, his arm is cut and he has a black eye. He hears about what happened to Cyril and the team go back to find him. When they get there, Cyril is dying. Agnetia and Bluestreak are secretly disturbed by his damaged appearance, but Poomy doesn't care and tries to help him. Cyril tells him he has to die, and that he wishes he could've got to know his brother better. He dies, leaving Poomy to try and shake him awake. Upon realising Cyril's death, Poomy cried. He declined Bluestreak's offer of going to a theme park to take his mind off the day. He slowly cheered up again over time, but he never really got over it. Until, that is, the Christmas Miracle happened.

Like most Poomahs, Poomy can see in the dark, run at high speeds (about 40 MPH) and can jump about 15 ft. He also has retractable claws and they ability to transform when around a large amount of energy. He has shown extremely advanced technological feats, such as building (at least) three functioning Iron Poom armours and repairing Agnetia's ship in A Monstrous Planet. He is also resourceful, having figured out how to reach high objects using a fishing rod (Star Crossing Lovers). 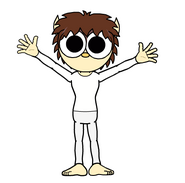 Poomy in his trademark pose with arms outstretched.

Poomy snowboarding in A Frightmare before Christmas. 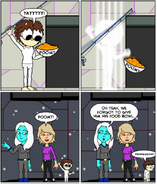 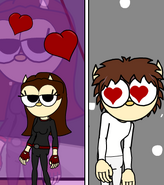 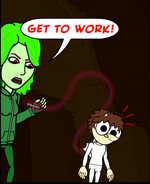 Mondays, am I right? 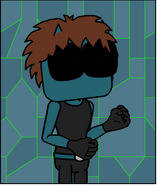 Poomy in his welding outfit 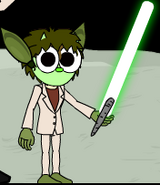 Poomy fights for his brother's life. 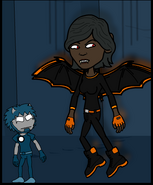 Poomy, injured after the destruction of the Impossibility MK I

Poomy is one of the few characters who are not getting a redesign for Volume II. After all, why mess with Poomfection? 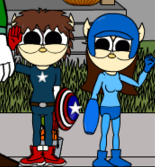 Poomy cosplaying as Captain America for Halloween.
Add a photo to this gallery

Like most Pooms, he speaks Poomian (a language consisting of mainly "Poom" and "Poomy"). He has since learned other words, like "carrot", "yummy", some onomatopoeia like kaboom and zap, and some names.

Poomy is scared of ponies.

He listens to Poomian rock music, like Linkin Poom, Pillet and Poomramore.

He understands and can write in English, but mostly speaks Poomian.

Retrieved from "https://raconianheroes.fandom.com/wiki/Poomy?oldid=5549"
Community content is available under CC-BY-SA unless otherwise noted.