"Maybe this year won't be so boring after all..." - Micheala after meeting Aidraxa

Michaela is a main character in the Aidraxa 2015 reboot.

Michaela is a caucasian teenager with brown eyes and long brown hair which flows down to her shoulders. She wears a purple sleeveless shirt, blue jeans and black/green trainers.

At the time of this page's creation, not much is known of Micheala. However she has been seen to be confident and intelligent (or at least she tries to come off as such), appreciating the challenges that Aidraxa brings with an intellect that matches hers. However, she can have a bad temper when pushed.

Michaela was originally made to replace Tammy as Aidraxa's love interest for the reboot. Aidraxa's writer confirmed that this was actually the first change he made to the canon when planning the series.

Michaela has had a rap battle against Tammy, published on the Raconian Komix collab account on bitstrips.

She is the fourth character in the Raconian Heroes canon to have romantic feelings for Aidraxa, after Tammy, Katrinix and Agnetia. Tammy, however is no longer canon. It's unknown at this time whether Katrinix will feature in the reboot.

There is a preview of the season one finale where Michaela is shown crying to the song "I'm not in love" by 10cc. The story is not yet known for this episode, which is named "War of the Worlds". 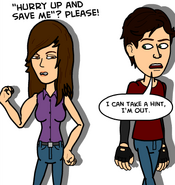 Michaela is meant to be a stronger and more independent character, who doesn't like to play the damsel in distress.

Michaela was never much of a social girl.

Michaela learns that, despite rabbits having large ears, they're sometimes not very good listeners.

Michaela's design portrayed in a preliminary comic.
Add a photo to this gallery
Retrieved from "https://raconianheroes.fandom.com/wiki/Michaela?oldid=5306"
Community content is available under CC-BY-SA unless otherwise noted.