Lydius, Episode One: First Awakening is the first episode of the first season of the Lydius franchise. It began September 14th, 2015 and ended September 27th, 2015.

Lydius, 17, is a Gransoian citizen. Over the past 2 years, the crime rate in Wynind, Gransoa has skyrocketed a whopping 72.4 percent. Lydius, growing increasingly concerned for her and her continent's safety, decides it's best for her to take control and make a stand for welfare. However, unknown to her, a group of mystery supporters of the chaos find her as their one true obstacle. 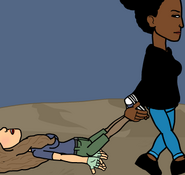 This episode is the first in the franchise.

Agnetia, Poomy, and Bluestreak make a cameo in the final part to this episode. Poomy and Agnetia will have main roles in Episode 2, while Bluestreak will not be present for the majority of the episode.

Retrieved from "https://raconianheroes.fandom.com/wiki/Lydius,_Episode_One:_First_Awakening?oldid=5331"
Community content is available under CC-BY-SA unless otherwise noted.