Camaron is a Raconian villain, and the main antagonist in Aidraxa. He has blonde hair and wears a dark blue shirt with dark red leggings (opposite of Aidraxa's light red t-shirt and blue jeans).

Camaron first battled Aidraxa on his third birthday. He struck Aidraxa's parents down with an energy blast, forcing them to start their regeneration cycles. He then attacked the now defenseless Aidraxa who, due to the two energy patterns around him, accidentally mutated and gained his ability to transform early. Aidraxa then quickly defeated Camaron. They have fought a lot since then, most notably in Raconians United and Total Eclipse.

Camaron realises that Aidraxa is powerless without the love and support of his friends. He lures them into a deadly trap on Raconia, and kidnaps Tammy Smith, taking her to the core of the planet. When Aidraxa finds him, Camaron kills Tammy in front of him, destroying Aidraxa from the inside. Aidraxa's rage and hatred towards Camaron awakens a dark force inside the core, which Camaron absorbs, transforming him into a demonic beast called Negax. Negax then defeats Aidraxa, who is saved by Jarla, who had also saved Aidraxa's other friends from Camaron's prison. After a strong pep talk from Agnetia, Aidraxa remembers the good memories of Tammy, and uses his love for her to realign the Raconian core, absorbing the pure energy and transforming into a powerful new form of his own. The two lifelong enemies clash again, but Aidraxa, fuelled by both love and hatred, gets the upper hand, and destroys Camaron's transformation, killing him in the process. This also upset Aidraxa, who had never intended to kill even his worst enemy. In the end, Camaron had won.

Camaron was originally intended to have a robotic limb.

He becomes the Dark Centurion after being recruited by Zoorrlok.

He has met other villains such as Daemus and Katrinix. 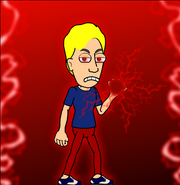 Camaron as he appears in the MMXIV Universe

Camaron as a child

Camaron (under mind control) as Holocaust 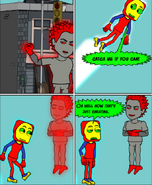 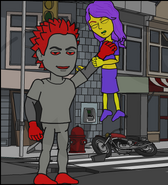 Aidraxa kicks Camaron (as Holocaust)
Add a photo to this gallery
Retrieved from "https://raconianheroes.fandom.com/wiki/Camaron_MMXIV?oldid=5683"
Community content is available under CC-BY-SA unless otherwise noted.