"The impossible's kind of a hobby of mine" -Aidraxa MMXIV

Aidraxa MMXIV is a version of Aidraxa from another timeline. Were you looking for the Aidraxa from the main RH timeline?

Aidraxa MMXIV is the main protagonist in the Aidraxa (2014 Series).

Aidraxa MMXIV appears a typical Caucasian human teenage boy, with messy brown hair and dark green eyes. In the first episode of the series, we see him wearing a light grey armour, with black forearms and boots. However in the episode one epilogue, we see Bethany take him clothes shopping, where he changes into a red T-Shirt, blue jeans and red trainers.

Aidraxa MMXIV is confident and determined in his actions, without being overconfident or cocky like his main series counterpart. He can, however, still rush into action unprepared, especially when angry or desperate to help someone close to him (such as Salova in Raconians United). He enjoys causing destruction when angered or stressed. He was also gullible when first coming to Earth, accidentally aiding a gang of criminals rob a store and a bank. But he immediately turned on them after realising the truth. He is also compassionate and has an emotional side. This was primarily seen in Rise of Zoorrlok when Aidraxa saw that he'd not only failed himself, but he had failed to help his friend, and he resolved to save her from her imprisonment in Maestus no matter what.

In the series, Aidraxa's shown to have dozens of forms. Some of his favourites include:

Aidraxa and Salova had a rivalry when they were younger. However, after Salova ran away and almost got killed while trying to prove her strength, Aidraxa realised that enough was enough, and that he wasn't going to push his sister like that again. From there, Aidraxa abandoned the rivalry ad started protecting his sister from danger until she got her own powers. From there, he offered to train her to better hone her capabilities, but Salova kept refusing until she decided to take up his offer so she could become a better warrior in Rise of Zoorrlok.

Tammy was the first human Aidraxa met. She was walking her dog at the time, who had ran off. Aidraxa found him by mistake, resulting with him sniffing Aidraxa's boots. Then Tammy found him and managed to laugh it off, quietly whispering to Dash about embarrassing her in front of "the cute boy". After she leaves, Aidraxa remarks about her beauty. Later, he was exploring Rosehill when he saw Tammy again, about to be hit by a speeding car. Aidraxa managed to tackle her out of the way, leading to an awkward moment between the two. Sparks were already flying, with Aidraxa meeting Tammy's friends at high school the next day, which nearly resulted in word of Tammy's new crush getting out.

The two shared a few moments together in the series, and it was finally revealed that Aidraxa held feelings for someone in Aliens on Earth, though he never revealed who until Blood Feud, when he smiled after hearing that Tammy liked him, before he composed himself. The two shared a date in Night of the Nova, which resulted in Tammy getting kidnapped and nearly experimented on by Dr. Destruktus. Aidraxa came to the rescue in his forced "Werenova" transformation, but getting a kiss from Tammy somehow reverted his body to normal functionality, allowing him to change into anything he wanted as usual. She made a joke about it, but he shrugged it off.

Amazed by Aidraxa's ability to complete an entire workbook in minutes, Rebecca initially saw him as a rival, as she was no longer the smartest in the class. This feud was later put to rest after she learned about his alien origin. She got to know Aidraxa more, however she was not present for a lot of the series so there hasn't been too much character development as of this time. However, it's shown that she worried about Aidraxa and the others forgetting about her after being kidnapped, and surprise when they came to rescue her.

Bethany was always a casual, laid-back girl. When she met Aidraxa, not much changed. She was the only human who knew about Aidraxa's abilities who was not disturbed by them at first, simply watching in awe, most likely due to her watching a lot of cartoons and being used to science fiction. She often tried to help him get more used to life on Earth, mainly by taking him to the mall and showing him Earth culture. However, when Aidraxa failed to stop Zoorrlok from kidnapping Rebecca, she took a sour turn on him and almost revealed his secret identity at school, but was interrupted by an attack from Dr. Destruktus' robots, which Aidraxa saved her from. She later apologised to him and they carried on their friendship.

Maisy first heard about Aidraxa's existence from Bethany, who at the time was mad at him for failing to save Rebecca from Zoorrlok. Because of this, Bethany tried telling Maisy about Aidraxa's secret, although she didn't believe it until she, Bethany and Tammy were kidnapped by Dr. Destruktus. Naturally she was amazed to see that he really did exist, and that he was about to save her from a "real life mad scientist!!".

Aidraxa was Katrinix's first and only love. She desperately tried to get his attention and in turn love, but always failed. So when he abandoned Raconia out of boredom and found a new home (and love of his own) on Earth, Katrinix went insane. She tried to kill Salova, Rebecca and eventually Tammy, until Aidraxa finally stopped her. Saved by Camaron, she told him where he was.

Camaron has always been Aidraxa's spiritual opposite, but physical equal. The most powerful and dangerous of Aidraxa's enemies, Camaron was the reason Aidraxa gained his powers early, following an attack on Aidraxa's third birthday. The two have fought time and time again over the course of their lives.

Aidraxa MMXIV first met Agnetia from the main timeline in Agnetia the Alien, after Agnetia unknowingly crossed into his dimension looking for a piece of the GodMode crystal that has scattered there. He helped her find it using Molepound, a form used to dig into and under terrain, then tried to help her fight Daemus.

Aidraxa gets angry at Bethany. This is the first time in the series that we see Aidraxa lose control of his emotions. 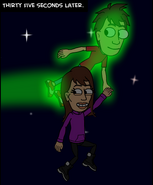 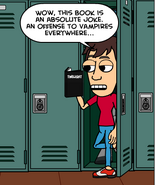 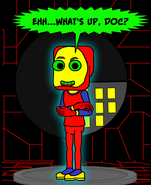 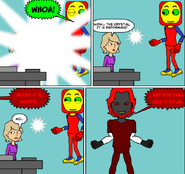 Glolite firing an energy blast.
Add a photo to this gallery

Aidraxa MMXIV has a cartoony appearance, in contrast to the 2015 reboot's realistic style.

He loves animals, and can telepathically understand them.

He prefers stripes over spots.

He likes cartoons, though it's never been specified which cartoons he watches.

Retrieved from "https://raconianheroes.fandom.com/wiki/Aidraxa_MMXIV?oldid=5667"
Community content is available under CC-BY-SA unless otherwise noted.