Aidraxa was the first Raconian to come to Earth and is the main character of the titular series Aidraxa. His Nova Energy signature is neon green.

Aidraxa appears to be a typical Caucasian adolescent, with wavy brown hair and a skinny physique. This is likely down to the typical Raconian metabolism. He wears a red and grey shirt, with dull blue leggings and red and grey shoes.

Aidraxa is a hero who has saved many lives, and he knows it. Cocky and headstrong, he quickly rushes into things without thinking. But after his rash actions lead to a cataclysmic disaster in space, he slowly learns humility from his human friends after being sent to Earth.

Aidraxa has a lot of transformations, his favourite/best are listed below.

Salova: Aidraxa and Salova have always had a friendly kind of rivalry. Salova believes that she is somewhat in Aidraxa's shadow, as he is the super powerful hero and she's usually considered to be merely his sidekick. However Aidraxa sees her potential as a powerful warrior if she would just listen to him for once and train.

Camaron: Aidraxa and Camaron both have a strong hatred of each other. The first time Aidraxa remembered encountering Camaron was his third birthday, when he attacked him along with his parents. The Nova Energy around him caused his cells to activate far earlier than intended, giving him his early powers. 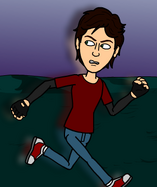 Aidraxa and Michaela with Gerald the rabbit.

Aidraxa in prison after a misunderstanding on Earth.

Aidraxa fighting a member of the Flamewar Gang

Aidraxa meets Michaela.
Add a photo to this gallery

Aidraxa really wanted a tail when he was younger, so he gave Speedstar a tail at first. He later scrapped it when he realised it messed up his aerodynamics.

Aidraxa and Viktolus played and fought regularly together. One time, they hid underground and waited for an unsuspecting passer by. One eventually came and the trio burst up through the ground in three monstrous forms. They were surprised to see that the passer by was Salova.

During his school years, Aidraxa and his classmates were all instructed to create a living organism and bring it into class the following week. However unbeknownst to Aidraxa and his creation and new best friend Squalorb, the group also had to dissect the creatures they had created. Aidraxa stared at the scalpel and his tentacled buddy before his teacher approached him and asked him to begin the dissection. When Aidraxa refused, the teacher picked up the scalpel before Aidraxa nova-blasted him through the roof, grabbed Squalorb and ran out of the school to safety. Squalorb has lived in the lab he were born in ever since.

He is rumoured to appear in Lydius.

Retrieved from "https://raconianheroes.fandom.com/wiki/Aidraxa?oldid=5645"
Community content is available under CC-BY-SA unless otherwise noted.