Special: A Frightmare Before Christmas

Agnetia the Alien, Episode 3: Tech Problems is the third installment and sequel to Episode One and Two. It aired from June 12th, 2014 until October 3rd, 2014.

When Agnetia's ship is struck by space pirates, the crew crash land in Asteroid City, and are hunted by a criminal who is after the same parts they need to fix the ship. Meanwhile, Bluestreak finds a shocking discovery about her past.

Agnetia: It was seem that the Poom may be cute, but he's a cowboy of a mechanic.

Bluestreak: That would explain why I found a carrot wedged in the satnav control.

Prohaxxr: Prepare, Agnetia! I am coming for what is rightfully mine!

Brandor: Well technically since she paid for it...

Poomy (to Prohaxxr after being captured): Myeh myeh! *blows raspberry*

It is revealed that Poomy listens to "I'm a barbie girl" in Poomian, seemingly as a guilty pleasure.

It is also revealed that Poomy is considered a pet, and is treated like one outside Brandor's shop, much to Poomy's annoyance to being patronised.

Agnetia refers to Linkin Park as "park of linkin" in this episode. 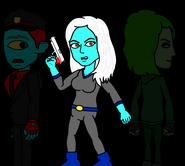 Add a photo to this gallery
Retrieved from "https://raconianheroes.fandom.com/wiki/Agnetia_the_Alien,_Episode_3:_Tech_Problems?oldid=5554"
Community content is available under CC-BY-SA unless otherwise noted.