Agnetia is a female Raconian and the main protagonist/title character of the series Agnetia the Alien. Her Nova Energy is white.

We first canonically meet Agnetia in a flashback in Agnetia the Alien, in which she is seven years old. She is attacked during a battle between Aidraxa and Camaron. Aidraxa transforms into what we presume is Speedstar and gets Agnetia far away. This inspires her to create the ultimate transformation to defend herself: GodMode. However she soon realises that this power is too much for a child to control, and places the power inside a crystal, then shatters it and scatters the pieces across the universe. All is well, until Daemus seeks the power of the crystals, and Agnetia must travel to Earth to find it before Daemus can. On her way, she accidentally travels through dimensions and meets Aidraxa MMXIV, who saves her from an attacking monster in Rosehill. He soon helped her find the crystal, but Daemus used it to transform into GodMode. Fortunately there was enough residual GodMode energy for Agnetia to transform too and defeat him. She then leaves Earth and starts her long journey home.

Agnetia is a heroic girl with a strong will powered by a stronger heart. She never gives up on a challenge, or her friends. She has her fears like anyone else, but she stands up to them and pushes her worries aside for the greater good. But she's not above giving Poomy a little tickle behind the ears every so often...

Agnetia appears to be a typical caucasion teenager. She has short,wavy, blonde hair and light brown eyes. She wears a purple and blue shirt and black leggings, with black and grey boots.

Blaydez: Sharp electric blades on arms (similar to those of Jaw from Aidraxa).

Digitech: Can hack, enter and control and machine.

Agnetia imitates the potato vine with a very unimpressed Poomy. 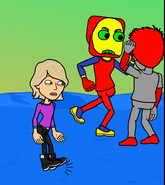 Agnetia tells Bluestreak about the time she met Thanos and Stan Lee. 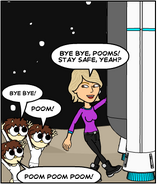 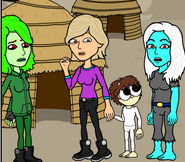 Agnetia's fear of snow leaves her trapped in the ship for most of the duration of A Frightmare Before Christmas. 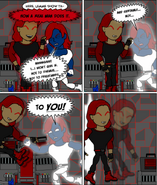 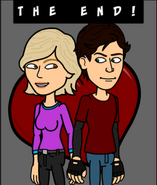 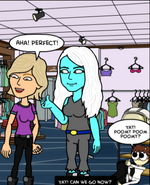 Agnetia finds a new outfit in When Worlds Collide

She has a crush on Aidraxa.

She loves Poomahs, and started a campaign to protect them from harm.

She likes Linkin Park, with "New Divide" being one of her favourite songs.

She used to be terrified of snow until her encounter with Frightmare in the Christmas Special "A Frightmare before Christmas".

Her boots have rocket thrusters in them enabling her to fly, however she has never used this ability in the series.

Retrieved from "https://raconianheroes.fandom.com/wiki/Agnetia?oldid=5644"
Community content is available under CC-BY-SA unless otherwise noted.